Getting Married in Church

Recently I went to a wedding of two of my friends from college – fellow lecturers Dave & Sally. 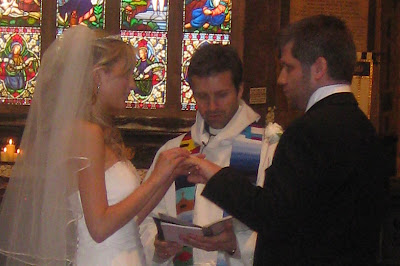 They wanted to get married in church and attended that church for some time in order to do so yet I don’t think they would wholeheartedly claim to be Christians. But what impressed me about their wedding was the Christian content. There was a clear talk about Christian marriage and prayers for the couple with which I felt a strong agreement.

I have been to traditional church weddings before and found them quite boring and been frustrated that the message was watered down. Perhaps this church was different or perhaps I have changed and over the years become more accepting of Christian traditions different from my own.

Like many people getting married today Dave & Sally had been living together for a while. Nowadays of course no-one bats an eyelid at an unmarried couple even signing into a hotel room together. And a forty year old virgin makes good material for a comedy.

So the idea of wanting to remain a virgin until your wedding is an unusual one. But I am not ashamed to say that that is what I did. Therefore I can understand others wanting to wait and those who become Christians who begin to learn about marriage from the Bible feeling that they should stop sleeping together until after their wedding.

But I wonder if we can also see that a relationship like my friends’ could be considered a marriage in biblical terms if the couple have already set up home? After all, Genesis 2:24 says nothing about a ceremony. People may then want to ratify such an existing relationship legally and before God. Personally, this is how I would see what Dave & Sally were doing on that day.

Congratulations to them and I pray that God will bless their marriage.
Posted by David Derbyshire at 10:18 am