N.T. Wright and the Gospel

N.T. Wright is one of the writers and theologians that have been involved in developing something called the New Perspective on Paul. His views on Justification in particular have recently come into the spotlight following a critique by John Piper in his book The Future of Justification. (David Matthew has some notes on Piper’s book here.) In response to Piper, Wright published Justification: God's Plan & Paul's Vision outlining his views and answering these criticisms. I’m still trying to get my head around this debate. But I have done a little research on N.T Wright and found a few links that I’d like to share.

The Paul Page is a site dedicated to the New Perspective on Paul and contains many articles. N.T Wright himself has written an article called ‘The Shape of Justification’. I found his comments on the relationship between the gospel and justification interesting:

“Let me make it clear that I do not, in any way, drive a wedge between 'the gospel' and 'justification'. They belong intimately together… But they are not the same thing. 'The gospel', for Paul, is the proclamation that the crucified and risen Jesus is the Messiah, the Lord of the world. When Paul arrived in Thessalonica, or Athens, or Corinth, or wherever, we know what he announced, because he tells us: The Messiah died for our sins and rose again... [Whereas] 'justification' is the declaration which God at once makes, that all who share this faith belong to Christ, to his sin-forgiven family, the one family of believing Jews and believing Gentiles together, and are assured of final glorification.”

I agree that it does sound sensible to preach Jesus’ death and resurrection – as the apostles did in Acts - and then teach the principles of justification later when someone has been a Christian for some time. I do wonder if gospel summaries would be better emphasising these facts about Jesus more than trying to explain justification. It is what Wright actually means by justification that needs further investigation.

I have also found a number of videos by Wright on YouTube including this one on what he believes about hell. I don’t think this is a major emphasis of his but some may feel that he is watering down the gospel here. What he says about hell sounds sensible to me but I wondered where exactly he was coming from.

I found this blog entry that pointed me to Wright’s book ‘For All The Saints’ very helpful. There he discusses the fact that universalism – the idea that all are saved in the end – “has gained enormous popularity in mainstream Western Christianity and compares this with the traditional teaching of eternal conscious torment”, and with a “middle position of “the ‘conditionalists’”. He explains that conditionalist teach that, “since humans are not by nature immortal, only those who are saved are granted immortality, so that all others are simply extinguished…” Wright then comments that he doesn’t “find any of these three traditional options completely satisfactory, but I think a somewhat different form of conditionalism may be the best we can do.”

Here I would tend to agree with Wright again. I rejected the idea of hell being everlasting conscious torment some twenty years ago now after reading John Stott’s chapter in Essentials where Stott argued for hell being a place of annihilation. More I recently investigated Universalism. I found it a lot more plausible than I expected but I couldn’t quite embrace it. (For more on this see David Matthew’s notes from the Evangelical Universalist.) I don’t find the Bible that clear on what happens to us after we die. I am looking forward to being with God for eternity but I fear I must agree with Wright that not all will make it but I cannot see that meaning those who don't will burn forever.

Anyway, it looks like Wright’s new book Justification is a key one to get – along with Piper’s book that he is answering. Skimming an extensive review of Wright’s book here I was struck by 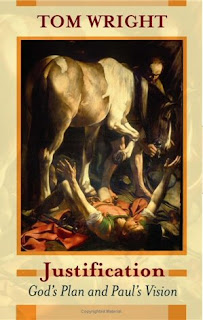 the reviewer’s comment that told how he previously “favoured evangelism over what I perceived as a liberal concern for social action and justice.” But then “began to explore the work of N.T. Wright.” And found himself “developing a larger theology in which God is calling a people to himself to be a blessing to the world. A gospel which embraced justice and social concern as well as a need to evangelise.” Once again I would say that this reflects my own journey and is an emphasis I would appreciate.

Whether I come to agree with him on justification or not Wright does appear to have some good points that are well worth listening to.
Posted by David Derbyshire at 10:19 am

Thanks for your thoughts David. Have you read Tom Wright's book - What St Paul Really Said?

It's quite a meaty book, but he says some very interesting things. For me it's given me a perspective on what God has done in Jesus that goes beyond our Western Church tendency to present the Gospel in an individualistic way (though with respect to a discussion I had with Andy, I accept the Gospel is for individuals!) You can borrow the book off me if you like...

Interesting reading your comments on NT Wright. I haven’t read much of his in full so am reliant on your links to inform me of his views.
I started off with the Youtube video on hell. I have to say, to my understanding, that snippet seemed at odds with scripture as a whole. There were definitely erroneous ideas put about in medieval times about heaven and hell however Wright in that clip seemed to chuck baby out with bath water.

From Genesis 3, the flood, the sacrificial system of the OT, the taking of Israel by Joshua, Uzzah and Ahio, Jesus’ teaching – parable of the sheep and the goats, wedding banquet etc, Ananias and Sapphira, Paul’s teaching, Hebrew’s teaching, Peter’s teaching, John’s teaching, the Bible consistently portrays God actively responding to human sin with justice in punishment and mercy in salvation. God actively judges and passes sentence on those who have rebelled against him and refused his salvation and actively sends people away from him / brings ‘destruction’ on them. It’s not palatable or pleasant yet it seems consistent to me with what scripture as a whole teaches and with the actions of a holy, righteous, just and loving God. I take no pleasure in highlighting it, neither I believe does God in acting it. Wright seemed to suggest that hell was the natural consequence of human action of rejecting God alone. He didn’t mention God’s active punishment. Does this not diminish the seriousness of rebellion against God. The consequences are reduced to the choices of men not to participate in God's redemption and it downplays the wrath of a ‘jealous’ God in response to rebellion against him (an unpopular notion in postmodern, enlightened thought.)

It raises another question in my mind which brings us back to the main part of your blog. Does it mean that salvation becomes the response of men to God rather than the gracious act of the loving God to people who are dead in their sins before God acts to bring them alive in Christ (Eph2:1-7ish) or in non-Pauline language, God bringing people into his light who had been walking in darkness, bringing new birth by his spirit. John 1 and 3. Just a thought….

I shall return to the links you have provided, study some more and get back to you.

Thanks for these interesting thoughts.

It might be relevant for me to comment that generally speaking when disasters happen I don’t think of it as God’s judgement.

Thanks for the offer of the book Ben I am currently reading Tom Wright’s Justification which is enough at the moment to be getting my head around.

As to Andy’s comment on who takes the initiative man or God, I’d just like to flag up that Piper takes more of a reformed/Calvinistic position than Wright does.