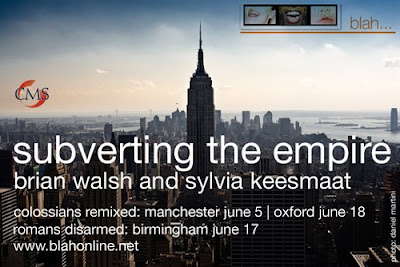 Last month I went to Birmingham Cathedral to hear Brian Walsh and Silvia Keesmaat on Romans. Sorry that I haven’t got round to blogging about this sooner, as it was really good. Having read their book on Colossians I was excited about what they would do with this epistle. The day was organised by CMS as part of their Blah series and also advertised in the Hope 08 newsletter. Richard Sudworth introduced them and you can read his comments on the day here. Walsh and Keesmaat’s site is also worth checking out.

I liked Walsh and Keesmaat’s teaching style; they were very good at getting interaction with us even though there were about fifty of us at a guess. They looked a lot at the context of the book and drew out some interesting parallels between the culture of the time and our culture today. Although there are very clear differences they looked at some points which are analogous. They used drama to great effect by acting out someone reading a section of Paul’s letter for the first time with someone heckling.

Their emphasis on the corporate life of the church rather than on personal salvation was something else that I liked but I wouldn't go as far as they did in saying that this is what Romans is all about. But I did like what they said about about not being ashamed of your difficulties from Romans 8. And they saw Paul’s words as subversive and so gave a very interesting interpretation of Romans 13 pointing out that the Roman authorities would not been pleased with what Paul was saying. Rather than making good citizens Paul was criticising the Roman authorities – who denied publicly that they ruled by the sword. Fascinating.

I found listening to this couple for a few hours that Tuesday was a real treat.
Posted by David Derbyshire at 3:39 pm

Tom Wright everyone series on Romans is well worth the read - can't recommend it highly enough.

Says much that you have commented on regarding chp13 and individualism and much much more.