Was Jesus like a pirate? Should we be pirates too?

I have just been reading an interesting blog debate on this subject.

The romantic image of pirates often overlooks their violent criminal behaviour. But historically this behaviour can be understood. ‘Let’s plunder these ships for ourselves rather than for the government’, was the thinking behind piracy in the 17th & 18th centuries. As such pirates are anti-establishment rather than purely anti-social. Their behaviour could be seen as a critique of the established order of greedy capitalism rather than just as personal selfishness. So argues Kester Brewin in a recent series of posts. 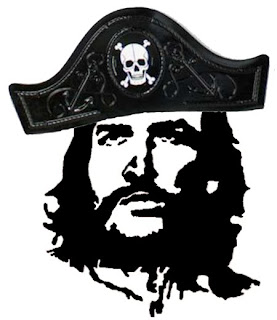 Illegal rebellion in this way can be seen as a way of social change. Pirate radio stations originally transmitted new styles of music that the legal radio stations did not. But eventually Radio 1 was born. Similarly, illegal music downloads eventually gave way to legal ways such as Spotify. Change occurs and we realise that the pirates were there before us. In the same way, Kester Brewin argues that Jesus was like a pirate in the way that he broke the religious rules overturning the stated order of his day.

Is there a motif here for Christians? Well, we do seek to be radical and do things differently. This inevitably critiques the established order – both of the world’s way of working and of religious ways of thinking. So why is this idea controversial? I am oversimplifying it, but in an answer to Kester Brewin, Richard Sudworth posts that we should not so easily dismiss Christians with a different revelation who are actually following God. Pete Rollins then takes this up arguing the importance of being considered heretical in order remain orthodox and Richard Sudworth comes back, among other things, playing the faithfulness card.

I think there is an important tension here between producing change by overthrowing systems in order to make progress and maintaining cohesive effective systems. It isn’t that that Kester and Pete are going too far. Surely we should look for innovation and not be afraid to make big changes? But if posible, shouldn't we do this without alienating others? Yes, sometimes Jesus and Christians may appear like pirates but I think there are some dangers with this image and that it needs to be carefully balanced with the concept of faithfulness.
Posted by David Derbyshire at 11:24 am