Ramblings on The Shack

I’ve just been reading through this novel for a second time. I started it last year but only got half way through despite it being a slim book. The controversy The Shack is now generating prompted me to finish it, read it through again and to blog these thoughts. I considered putting a review on Amazon, giving it 4 out of 5 stars, but then realised how many reviews were already there. William Young’s book has been a runaway bestseller for over a year now - not bad for a self-published Christian book. The chances are you know someone who has already read it. 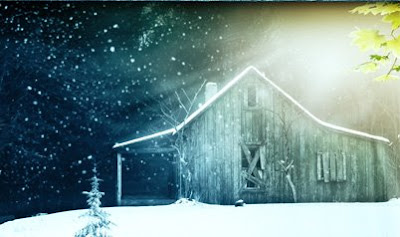 The Shack tells the story of one man’s experience God - how this has been affected by a tragedy in his life that has left to him living with depression and a love/hate relationship with the Almighty. This relationship takes an unexpected turn when the protagonist Mack receives an invitation – apparently from God – to spend the weekend together at an old abandoned shack.

The narrative in the book starts off being realistic. At first I thought the book was going to be mainly a detective novel. But then the snowy world around the shack suddenly changes into spring and Mack meets manifestations of the Trinity. Jesus is, as you would expect, a carpenter from the Middle East but Father is portrayed as a black woman called Papa and Holy Spirit as an oriental woman Sarayu. God appearing as female may shock some but Young quickly clarifies that the purpose of this is to challenge religious stereotypes. As the story progresses we are left wondering if Mack is lying unconscious in the shack dreaming or having visions or that perhaps he has died and this is the afterlife. I couldn’t help thinking of parallels to the TV series’ Life on Mars and Ashes to Ashes where the heroes’ adventures take place in a dream world while in a coma.

The bulk of the novel is about Mack’s conversations with the Trinity. And there are some moving descriptions of how the three characters relate to each other and to Mack. Unfortunately, Young also tries to explain some of his own theory of the Trinity. It was here that I initially got stuck. It is difficult when discussing the Trinity to avoid the accusations of heresy unless you are a theological scholar, which Young is not. But I didn’t immediately jump on Young’s ideas as error as some have. The first time through I just got bored. It wasn’t until I got past this section and realised the novel isn’t about the Trinity per se but about how we can relate to God in tragedy then the whole thing took off for me again.

The Shack challenges the traditional view of God as distant and judgemental emphasising instead his loving relational nature. This is controversial for some and clichéd for others. However the message of the book clearly comes through: everyone is special to God, he cares, he is not the cause of our pain and we can run to him for comfort. This is not just intellectually argued but depicted in an emotionally powerful way that many have testified has touched them deeply.

The plot works well. The conversations climax as Mack realises how much he blames God for his plight. The dialogue with each member of the Trinity then sensitively unravels this. I loved it, in one of these chats, when Jesus points out that New Jerusalem in the Book of Revelation doesn’t refer to heaven but to the church. The description of the church Young offers is not one of an institution but of a community built on the sort of relationships modelled in Papa, Jesus and Sarayu. As Larry Crabb would say, we join in the dance of the Trinity. Papa condemns religion as man-made deception. And I am still trying to get my head around some of the discussions of law and grace and about how God wants to set us free from the expectations of others.

The Shack has produced heated debates across the internet. Some love it and want the world to read it. Others condemn it as heresy. I agree it is a good book and I’m glad I finished it. I must confess to a few reservations but I would not say it’s heretical.

If you want to read more about this book I recommend fellow blogger Scott Lencke’s lengthy three-part post that looks at some of the main criticism.

Part One summarises the plot and looks at how The Shack stops short of the universalism and does in fact honour scripture.

Part Three concludes that The Shack does not teach heretical views on the Trinity - such as Modalism - but says that Young has not always chosen his words well. It also discusses the reasons for God appearing female.

Also two books published February 2009 discuss the theology of the Shack. Confusingly they are both called ‘Finding God In The Shack’ - one by Randal Rauser and one by Roger E Olson. Skimming the reviews there doesn’t seem much to choose between them but the one by Olson looks a little more critical of Young’s ideas.

I hope you’ve found these ramblings helpful. In the end, whatever we think of this novel, my prayer is that we all learn something about the nature of God revealed in The Shack. I trust we will learn to run to him in times of trouble and not away.

Posted by David Derbyshire at 7:52 pm

I actually really enjoyed 'The Shack' - I read in Christmas 08. One of the reviews described it as 'faith affirming' which is my experience of it. I therefore found it very hard to see such vitriol directed against it in those internet debates. Nobody would argue that The Shack should be added to the Canon of Scripture - it is, after all, a fictional novel at the end of the day. I personally found that when I felt uncomfortable it was usually because I had assimilated stereotypical stances which were not strictly Scriptural.

One possibility I have entertained is that many of the book's casual critics are not generally wide readers. I read a LOT (average of 60 books per annum) and do not shy away from any author, genre or subject matter. Thus I think that I may be more equipped to appreciate, and enjoy, the novel for being just a novel rather than feeling compelled to disassemble it.

Thanks Anna! It is an enjoyable read. I wonder if C.S. Lewis got this sort of flack. Perhaps debates like this become better known today because of the internet?

Thanks for the links, Dave.

Hope to see you at Celebration.

To be honest, I thought it was okay, but not the greatest story-telling. At times there was just a bit too much shoe-horning of theology and 'information' that seemed to interfere with the concept of it being a novel.

I loved this book. For me, it answered so many questions, as well as opening up new ways of thinking of things. Another book I recently read builds on this: Gita Nazareth's Forgiving Ararat. This book too explores themes of judgment and forgiveness in the face of violence. As a fan and publicist for this book, I'm interested to see what parallels are drawn between the two.