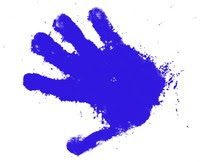 This afternoon I went with Callie to try out Kidz Aloud a children’s club which runs once a month at Carr’s Lane Christian Centre. They alternate between Godly Play which is fairly quiet and other creative activities which tend to be noisier. We’ve been to Godly Play at Greenbelt before and enjoyed it.

Today they retold the story of Jesus healing the paralysed man by stuffing some old clothes and putting them on a cardboard stretcher and lowering them from the balcony. It was a noisy one! Callie enjoyed it and is looking forward to going again. I'm keen to see some of the Godly Play. But next month they have a family fun day and then they’re not on again until September.
Posted by David Derbyshire at 8:49 pm