Should I smack my little girl? 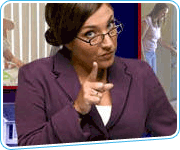 One of the most helpful inputs that I have had in my parenting has been the positive parenting classes that I did through my local Sure Start. They have a great emphasis on rewarding good behaviour rather than punishing bad behaviour, though we did discuss some suggested sanctions that may sometimes be necessary. Such techniques like you may have seen on TV, in for example Supernanny, have proved to be very effective. So I have always tried to avoid physical punishment in the disciplining my little daughter.
Recently I have been looking at the few verses about parenting in Proverbs and have come to the conclusion that they need some careful hermeneutics. In particular I am not convinced that we can take the verses that speak of a ‘rod of correction’ as a command that to use corporal punishment. Perhaps the ‘rod of correction’ is, as my NIV study Bible says ‘a figure of speech for discipline of any kind’. Could these verses simply be observations of the dire consequences of lack of any discipline?
I can understand that some see nothing wrong with smacking their children and use such verses to support it and see it as a good thing. Perhaps those that oppose smacking need to realise that what such Christians are proposing is using smacking as a consistent and restrained sanction and would utterly condemn losing your temper with your child. Nevertheless I would need to see something a lot clearer in the Bible before I would be convinced that smacking my little girl would be a good thing.

What do you think?
Posted by David Derbyshire at 4:14 pm

Hi David, thanks for thoughtfully considering this subject. It's something I feel very strongly about. We have laws against adults hitting other adults. If one strikes another adult, one is arrested and goes to prison. Yet, children are not afforded the same protection -- and they are vulnerable. Children learn violence when they are struck by their parents. My wife and I do not smack our kids, and we receive many compliments on how well-behaved our children are. They do well in school, have friends, and are involved and other activities. Hitting is not necessary. Are you familiar with the work of Alice Miller? I think you'd enjoy reading her.