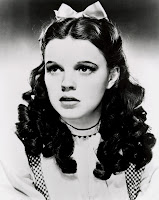 Recently Callie, Nettes & I went to see the Wizard of Oz at the mac with our church’s midweek house-group.. at the weekend!

The colour sequences were amazing to see on the big screen. They have cleaned up very nicely. Callie was a bit scared of the Wicked Witch but I think she really enjoyed it. She recognised 'Somewhere over the rainbow' as we had just been watching a performance by Tori Amos on YouTube

Interestingly enough I was just stuck by what this film has to say on the topic of ‘leadership’.

Don’t be like the Wizard who is threatening and makes a show of his power but is really a little man hiding behind a curtain.

What a teenage girl as a model of leadership? A girl that is bewildered and lost in a world that appears to make no sense to her?

Perhaps we could all do with being a bit more like Dorothy.
Posted by David Derbyshire at 2:48 pm